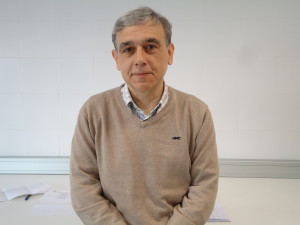 Dr Miguel A. González-Gay gained his medical degree in 1980 from University of Cantabria, Spain. He did the Residency in Rheumatology between 1981 and 1985 at Hospital Universitario Marqués de Valdecilla, Santander, Spain. He obtained the ECFMG Certification (USA) in 1985.
He worked as an emergency physician between 1986 and 1987 in Cantabria. Afterward, he was a Rheumatology Staff at Hospital Xeral-Calde, Lugo (Spain) from 1987 until 2009.
Currently, he is the Head of Section of Rheumatology at Hospital Universitario Marqués de Valdecilla, Director of the Epidemiology, Genetics and Atherosclerosis Research Group on Systemic Inflammatory Diseases, IDIVAL, and assistant Professor of Medicine University of Cantabria, Santander, Spain.
He was a rheumatology research fellow at Mayo Clinic, Rochester, Mn, USA. (1993-1995).
Outstanding Doctorate Award on studies on the effect of the H-2Eb gene polymorphism in the protection against collagen-induced arthritis and its implication in the role of HLA-DRB1 molecules in rheumatoid arthritis in 2006.
He has done research on epidemiology and genetics of rheumatic diseases, in particular on vasculitides such as giant cell arteritis and Henoch-Schönlein purpura, and connective-tissue diseases. Since 2000, Dr. González-Gay has also focused on studies on atherosclerosis in rheumatic diseases.
He has a Spanish grant supported by Instituto de Salud Carlos III – Fondo de Investigación Sanitaria, aimed to investigate genetic markers of endothelial dysfunction and cardiovascular disease in patients with rheumatoid arthritis.
He belongs to the editorial Committee of several journals including J Rheumatol and Clin Exp Rheumatol among others.